Several weeks ago I gave you the first part of my insight into Polonia Warsaw.  It’s time to join the guys from dumastolicy.pl for part two.  Amongst other things, they’ll be talking about how Polonia is seen by other fans in Poland, whether the club is famous for a specific style of play and what the atmosphere is like at their stadium Konwiktorska.

Rightbankwarsaw: Where do you think Polonia will finish this season?* (*There are sixteen teams in the Polish Ekstraklasa).

Trickywoo: That’s an interesting question! If I knew the answer I’d make a killing at the bookies! As a result of the departure of our previous owner and the unclear situation the club was in until just before the season started and the fact that 16 players left us in the summer the aim was simply to stay up.  However due to the great atmosphere in the squad and the ambition and hard work of the coaching set-up, the team will finish in the upper half of the table.  Everyone’s afraid of matches against us! Due to this there’s a chance of a very high finish, quietly we’re dreaming of playing in Europe next season, so between 2nd and 4th (depending on what happens in the Polish cup).

Rightbankwarsaw: What’s the atmosphere like at Konwiktorska? Is it better or worse than that at other stadiums in Poland?

Pilsner: It’s difficult to define.  The atmosphere’s worse than at Lech Poznań, Legia Warsaw and Wisła Kraków but better than at GKS Bełchatów, Podbeskidzie Bielsko-Biała and Piast Gliwice.

Trickywoo: Polish fans behave very differently than in England.  Here supporters cheer their team on spontaneously and throughout the entire match (this is the case at every Polish ground).  At stadiums there are so-called ‘nests’, or Ultras sections which lead the chanting, show what should be sung, what props should be used, when to jump, turn away from the team, clap and so on.  It’s the same at Konwiktorska,  The Main Stand is calmer – here visitors sit, old people, the press and officials.  The Ultras are situated in the ‘Stone- Stand’ opposite.  There no-one sits, even though there are seats, and fans don’t stop singing during the entire match!  Konwiktorska is different to other stadiums though as the crowd doesn’t behave agressively towards visiting fans (or anyone for that matter).  The exception is of course Legia.  The supporters of other clubs, if they don’t start anything, are treated with respect.  The fans of newly-promoted sides normally comment on how well they are treated at our stadium.

Kwikster: As we’re playing so well the atmosphere is great.  The attendance is growing all the time.  People are happy because the team is really giving it their all.  There are no complaints after defeats…and definitely not after those where the team really went for it!

Rightbankwarsaw: What do other teams’ fans think of Polonia?

Pilsner:  We’re treated relatively typically but I think we’re unique in our own way.

Trickywoo: Strong pro-Legia lobbies try to make sure we’re seen badly in Poland.  On Internet forums people talk about our tiny attendances (when in actual fact we fill at least 80% of the stadium every week).  They also say that you never see people in our colours on the streets of Warsaw.  This is true but it’s due to the aggressive actions of certain groups in the city.  For example my 14 year old son was attacked by a group of Legia fans and they stole his scarf from him, thank God he wasn’t beaten up!

In general other fans are indifferent or reasonably friendly towards us, even in cities with which we compete (Poznań, Gdańsk).  In Poland there is a unique system of so-called agreements between clubs.  At the moment we don’t have this in the Ekstraklasa because our ‘friend’ club Cracovia got relegated last year.  Legia however has an agreement with a newly-promoted side Pogoń Szczecin. 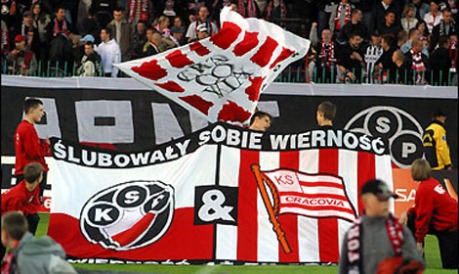 Kwikster: Legia fans see us as sell-outs after we bought the licence of Groclin Dyskobolia* (*Polonia took the place of Dyskobolia in the Ekstraklasa in 2008 when the then-owner of Polonia Józef Wojciechowski bought the side from Western Poland).  Other clubs don’t especially dislike us.  Of course it depends.  Wisła Kraków, Pogoń Szczecin and GKS Bełchatów don’t really like us and will always look to do us down.  In terms of neutral clubs I’d mention Podbeskidzkie and Piast Gliwice, we have no problems with them…ah the world of Polish fans!

Rightbankwarsaw: Is Polonia known for a specific playing style?

Pilsner:  This season we play attacking, pacy football and aim to get the ball forward as quickly as possible.

Trickywoo: Not really.  At the moment we play very attacking football, based on the idea that we have to score more than the opposition, no matter how many goals we let in.  But it isn’t really a style which differentiates us from other teams in any special way.

Kwikster: Our style is interesting…We play with pace, on the front foot.  We use the wings and play on the counter-attack.

Rightbankwarsaw:  Historically, who are the club’s star players?

Trickywoo: There are several legendary Polonia players, and also people associated with the club but I’ll leave that to Kwikster to explain.

Kwikster: Władysław Szczepaniak.  He played for the national team.  He was one of the star players of his time.  He played at the highest level for many years and was a one-club man.

Rightbankwarsaw: Thanks ever so much guys.  I hope that has given you all a good bearing in the world of Polonia Warsaw. There’ll be much more on them in future on the blog!