The official start of spring is just over two days away but snow continues to fall in Warsaw.  This unseasonal weather has caused havoc to the lower league schedule in the Mazovian region.  Indeed matches from the fourth tier down have been already been called off four days in advance of this weekend’s fixtures.  Whilst decisions such as these may seem somewhat hasty clubs at those levels quite simply do not have the resources to make the colossal effort required to get snow-covered pitches into a fit state.  The necessity of reaching an early decision regarding postponements was brought home to me on the weekend when I experienced a bizarre series of events when attempting to attend a match.   I’ll have a go at relating the absurdity of it all in this post.

I have been blessed with a number of football related visitors over the last couple of weeks.  At the Polonia-Wisla game I was joined by a Wisla-supporting friend making his twice-yearly visit to Poland.  Last weekend a fellow Polish-footie blogger made his way to Warsaw to catch up on a couple of games.  We decided to go to watch Liga I side Dolcan Ząbki on Saturday.  Dolcan sit in mid-table in the Polish second tier and they were scheduled to play against high-flying Olimpia Grudziądz a team which had given Legia Warsaw a good game in the Polish cup several weeks ago.  In preparation for the match my friend encouraged me to get media accreditation so I could produce something for the blog.  I thus wrote to the press officer who was most happy to issue me with a press pass.  All was sorted, now we just had to get ourselves to the match.

Dolcan play in the small town of Ząbki, just 10 kilometres from the centre of Warsaw.  My friend and I thus met up at Warsaw’s metro centrum on a sunny, brisk and chilly day and made our way to Warsaw Wileńska, the train station which connects Warsaw with its North-Eastern environs.  Having a bit of time on our hands before the train departed to Ząbki we trailed around the shopping centre which was built there when the station was modernised in 2002.  We then got on the train, found ourselves a seat and fifteen minutes later arrived in Ząbki.

Once we were there we quickly discovered that the football club doesn’t seem to be an important part of the town.  The evidence for this were the complete lack of signs directing fans to Dolcan’s stadium.  Undeterred we set off to find the ground.  We first asked for directions a mother taking her young child for a mid-afternoon walk.  She pointed in the general direction of the ground telling us ‘Ząbki’s a small place, you’ll find it easily.’  Unfortunately our task wasn’t so simple, after heading down the road for a while without having any luck a local girl had to give us some help.  Finally after getting lost in the middle of a housing estate we happened upon the ground.

As we came within site of the stadium something unexpected happened.  I received a text message from a friend saying the game had been called off.  This was somewhat surprising considering it was only 45 minutes before the game was scheduled to kick off!  Despite the bad news we decided to see the stadium anyway and maybe try to get some club merchandise.  It took us a while to find the main entrance to the ground, a situation which wasn’t helped by stewards pointing us in the wrong direction.  When we finally got to the entrance confusion reigned.  In front of the main stand stood flummoxed Olimpia Grudziądz players near their team bus and a whole host of Dolcan security guards.  Several minutes later an ambulance arrived at the ground which had obviously not been informed of the match being postponed.  This was quickly followed by about 50-100 Dolcan fans, enthusiastically chanting thinking the match was still going ahead.  Several minutes later they were heading in the opposite direction with their tails between their legs. 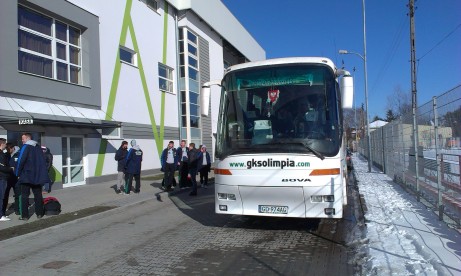 Now as we had come all the way from Warsaw I thought we might as well use our media accreditation to talk to someone from the club.  I thus shuffled up to a security guard to ask if we could have a look at the stadium from the inside.  I explained that we had media passes and that my friend had come from England to watch the game.  The guard told us that we would have to wait for a while to see if someone could help us out.  We duly waited for several minutes, but as no-one came to talk to us, we went to chat to another security guard.  This time the guard was a lot less polite.  I asked  if we could see the inside of the stadium, the guard simply said ‘nie’ or ‘no.’  I said ‘well my friend has come all the way from England to see the match and we have media passes’ to which the guard answered brusquely ‘you’ll only be able to see the stadium when the next match is on.’  He was hardly a welcoming chap so we moved back to our waiting position near the bus, basically no-one from the club was prepared to help us.

The only person nice enough to talk to us was a journalist who saw two slightly downtrodden chaps waiting around looking perplexed.  He wound his windows down and asked where we were from.  We told him our situation and that the security guards had been rather unpleasant.  He was nice enough to offer to send us the photos he’d had the chance to take of the ground.  He also explained the situation regarding the postponement of the match.  Apparently Dolcan had contacted the Polish Football Association (PZPN) four days before the match asking for it to be rescheduled.  The PZPN had told them that the game had to go ahead.  Two days before the game Olimpia Grudziądz had themselves contacted the PZPN with a request for postponement as they did not want to spend money on accommodation and transport to Warsaw when the match might not go ahead (Grudziądz is 250 kilometres from the Polish capital).  Once more the PZPN told them the match would be played.  Olimpia had finally made the journey, shelled out precious zlotys on hotels and fuel, trained the day before the match and…one hour before kick-off the game was called off due to a frozen pitch.  Farcical stuff folks.

There was nothing left for us to do apart from take some photos of the pitch and make our way back to Warsaw and a comfortable, warm pub.  The organisation of the match and our treatment by the security guards left a lot to be desired.  Unfortunately these kind of things seem to happen quite regularly in the world of Polish football.  It’s good material for a blog but the continued poor handling of the beautiful game here is disconcerting.  The PZPN’s poor decision-making caused considerable discomfort for several hundred Dolcan and Olimpia fans, Dolcan itself, the local police and emergency services, and Olimpia Grudziadz.  The security guards, well they succeeded in seriously pissing off a couple of cold Englishmen.  Its behaviour like this which puts people off travelling in Poland, its disappointing and quite frankly depressing.

I won’t let it get me down though, not when there’s the excitement of a crucial Poland-Ukraine World Cup qualifier just around the corner.  This is RightbankWarsaw signing off.