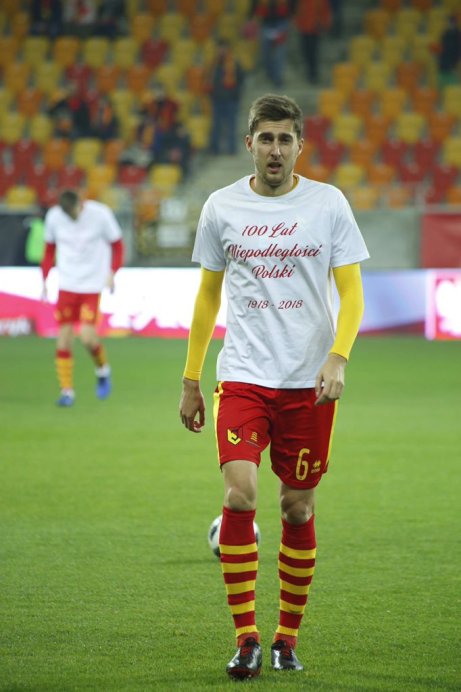 The Second World War is never far away in Poland. Last week scandals linked to the war erupted during the Middle East Summit in Warsaw. The NBC anchor Andrea Mitchell said that the 1943 Warsaw Ghetto Uprising was against the Polish and Nazi Regime (when it was simply against the German Nazi regime), US Secretary of State Mike Pompeo called for restitution of Jewish property rights (when it was not on the official agenda) and then Israeli PM Benjamin Netanyahu said that Poles were complicit in the Holocaust. All of these events caused uproar in Polish society, and anger (and in some cases guilt) erupted in political debates and at dinner tables across the country.

As in other areas of society the world of Polish football has not been immune to historical controversies related to the war. One recent incident occurred in August 2017 when a Legia Warsaw Tifo to commemorate the Warsaw Uprising during a Champions League qualifier was praised by many (but criticised by some) for its graphic portrayal of Nazi German execution of children during the Uprising.

On Saturday a new controversy erupted during the Ekstraklasa match between Jagiellonia Białystok and Wisła Płock. Midway through the second half there was a scuffle in midfield between Wisła Płock’s Dominik Furman and Jagiellonia Białystok’s Taras Romanczuk. Romanczuk was visibly enraged and for the rest of the second half played with increased energy and determination.

Before I explain what happened a bit of background regarding Romanczuk is required. Romanczuk is a formerly Ukrainian player who was born in Western Ukraine. After playing in lower level Ukrainian football he began to play for 4th tier Warsaw area side Legionovia Legionowo in 2012. Romanczuk did so well at Legionovia that he made the move to Ekstraklasa side Jagiellonia Białystok in 2014. Since then he has made 142 Ekstraklasa appearances for the Białystok club and has become one of the best Ekstraklasa midfielders, regularly being linked with a move abroad.

Romanczuk also decided to gain Polish citizenship, something that he was legally allowed to do after 5 years of residence in Poland, but this was a decision which could not be taken lightly. Ukrainian law does not permit dual citizenship, so when Romanczuk gained Polish citizenship in February 2018, he ceased to be Ukrainian. Romanczuk’s choice to give up his Ukrainian passport to be Polish meant that some parts of Ukrainian opinion considered him to be a traitor.

By deciding to be Polish, Romanczuk was entering murky waters for another reason. During the Second World War Polish-Ukrainian relationships were tempestuous to say the least. In the inter-war period large amounts of Ukrainians lived in the Eastern parts of the Polish state. The Second World War brought the complete destruction of civil society in the Polish East as first the Soviets and then the Nazis occupied and then reorganised the territories in the way they felt fit.

It was at this moment in 1943 that Ukrainian nationalists took the opportunity to purge lands they considered to be ethnically Ukrainian of their Polish inhabitants. The Organisation of Ukrainian Nationalists (OUN), and their armed wing, the Ukrainian Insurgent Army (UPA) subsequently ethnically cleansed what had been Eastern Poland of its Polish population. This brutal action brought the murder of 100,000 Poles (but also Ukrainian moderates) in 1943 and 1944. The leader of the OUN faction which is considered responsible for the cleansing was Stepan Bandera, his followers being called ‘Banderites’. In today’s Poland the term Banderite is used as an insult, with some Poles using this epithet in a derogatory way towards Ukrainians. In short, it’s use regarding Ukrainians in Poland borders the line between racism and xenophobia.

When Romanczuk was called up to play for the Polish national side in spring 2018, most commentators were relatively positive about his inclusion in the squad. He had made the decision to give up his Ukrainian citizenship, he had lived in the country for the appropriate amount of time and Romanczuk could also speak good Polish and apparently has a Polish grandfather. There were other voices though. The most vocal ones focused on the fact that he was not really Polish, the term used when translated from Polish is a ‘painted fox’ farbowany lis. This controversy goes back to debates surrounding Poland’s Euro 2012 squad where a number of players, including midfielder Ludovic Obraniak, were criticised for cynically choosing to play for Poland, despite not speaking the language and having very little links to the country.

Romanczuk, despite making a promising debut, didn’t make Poland’s World Cup 2018 squad, and debates about his background seemed to fade into the distance.

That is until Saturday. After the match vs Wisła Płock Romanczuk gave an interview to Radio Białystok regarding the scuffle between him and Furman which had taken place. Romanczuk stated:

‘We represent anti-racism causes on the pitch and he (Furman), called me a Banderite! It’s difficult to contain your emotions when you hear something like that. Knowing the history of my family…my family was also murdered by Banderites and that’s what he calls me! It’s the last time that I shake Furman’s hand.’

Social media at once was ablaze with commentary regarding the incident. Many people took Romanczuk’s side, stating that it was out of order for Furman to do such a thing. Furman in general is quite a controversial footballer in Poland, partly for his publicly stated affection for Legia Warsaw, a club many people love to hate, and a former club of Furman’s. Piotr Wołosik a journalist covering Jagiellonia added fuel to the fire when he claimed that not only had Furman called Romanczuk a Banderite but also a painted fox (see above). One of Furman’s team-mates then apparently said to Romanczuk ‘why did you even come to Poland in the first place?’

Furman’s club Wisła Płock, and Furman himself have denied Romanczuk’s allegations. Initially Furman didn’t want to comment on the events but finally he issued a statement last night:

‘I categorically deny that I made the comments that Romanczuk has accused me of…Strong words are said during every league match but…at no moment did what Romanczuk says happened happen…I will fight to clear my good name and have asked for legal advice from my club Wisła Płock.’

On Monday morning the Ekstraklasa League Commission has hinted that the incident could well be discussed at a future sitting and Białystok police are also looking into the case. It remains to be seen whether Furman actually did call Romanczuk a Banderite and currently the incident is simply Romanczuk’s words against Furman’s but while the Second World War ended 74 years ago, debates surrounding it in Poland cannot be avoided.

One thought on “Second world war on the pitch: Taras Romanczuk vs Dominik Furman”